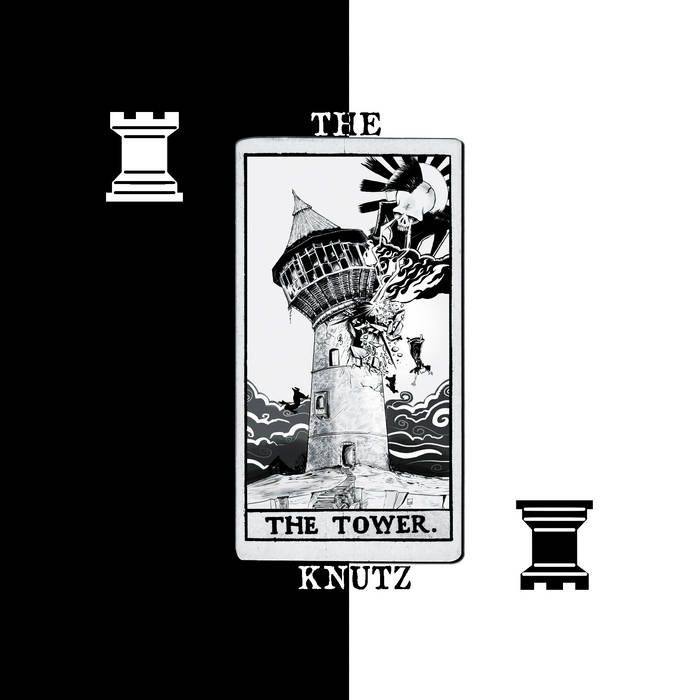 Asaf Linzen The more I listen to this Album – the more I love it, a mandatory album for all post punk fans

"Like crooked angels
Whispering again
The mockery ballad
Only shadows remains "-" The Mockery Ballad ", The Knutz

Twisted angels whispering once more amidst the shadows: this is a good metaphor for the eternal return of post-punk, which rose from the self-destructive ashes of original punk and lifted much bolder flights than its predecessor. This army of crooked angels - the gothic, the synthpop, the cold wave - takes off again in the shadows that dominate The Tower, The Knutz's third studio album. In reworking with conviction the most characteristic elements of post-punk aesthetics in 11 songs sung in English, the trio (based in Niterói, RJ) surpasses the geographical and temporal limitations. It may have been recorded in 2018 in Brazil, but it is fittingly aligned with the sounds that served as reference to the band, released in Europe and the US 30, 35 years ago.

Daniel Abud (guitar, keyboards and voice), Tiago Abud (bass) and Airton Silva (drums) are not newcomers. Since 2004, they have pursued a sound that is reportedly influenced by names such as The Cure, Bauhaus and David Bowie. The loyalty to these icons has always guided The Knutz's music, despite changes in training and wandering around Europe (excursions in England in 2010 and Germany in 2016). Confirming the universality of post-punk language, they were noted by international critics with their first two albums, Ghost Dance Party (2010) and We Are the Monsters (2015). The Tower, produced by Bruno Marcus (Tomba Orquestra, Gilber T), is the natural continuation of a trajectory that only seems fixed in the past - but that actually transcends the clichés that could be expected from a work with such a definite personality. As Daniel sings in "Thank the Moon": "The night has more colors than the day". There are unexpected and original colors on The Knutz's dark night.

The title is a reference to the concept that ties the songs of the disc, derived from the tarot: the tower is the greater arcane, and the letters narrate its imminent fall, the drastic changes brought by the collapse and the beginning of the reconstruction of the tower, doomed to collapse once again. For the band, it is a metaphor for the state of voluntary blindness in which mankind lies, embedded in a seemingly indestructible tower. Everything comes down shortly at the opening, with the title track ("Fake structures withstand no more / Nothing is safe as we thought"). The distressing narrative drawn by the lyrics goes through the alienation ("Nobody knows what is wrong / But they laugh and laugh upon", in "The Fool"), the feeling of misfit in society / To deconstruct me, "in" It Hurts ") and terminal loneliness (" The cave frozen my heart "in" The Cave "). Finally, in "About to Fall", we confront the inevitability of another fall ("Don't matter what we've done / In the end we're about to fail") ... and the resumption of the morbid cycle.

"The Tower" is the darkest moment of the album, which continues alternating climates and timbres without deviating from the fundamental elements of post-punk. Striking bass lines lead "The Fool," "The Mockery Ballad," "Do Not Judge" that counts with the DJ, singer and burlesque performer Ludmila Houben, and "Hex," complemented by sparse and atmospheric synthesizers. Already in "It Hurts", "Thank the Moon" and "About to Fall" guitars take center stage. "The Hand that Takes" evokes a surprising flavor of dub reggae, another ingredient typical of the post-punk salad. And with "The Woman with the Coffin Case," they contrast the more gothic of the lyrics ("She is cold as a corpse, but a beautiful grace") with a shameless beat of soar dancing and the crucial participation of the vocalist Luciana Lazulli, who still scores on three other tracks on the album.

The Tower, the album, can be regarded as a reverent and careful review of the original post-punk lessons. You can also position The Knutz in the pantheon of recent bands that are also inspired by the giants of the past - She Wants Revenge, Interpol, The Editors. Or it can be seen only for what it really is: a work that will take the trio to flights ever higher, on the wings of crooked angels, always in the midst of the shadows

All songs and lyrics by The Knutz 2018

Special Thanks to: Ludmila Houben – ‘Do Not Judge’ backing vocals, ‘Thank the Moon’ lyrics composition. Luciana Lazulli – ‘The Tower’, ‘The Woman with the Coffin Case’, ‘Hex’, ‘The Fool’ backing vocals . João Pinaud – ‘The Mockery Ballad’, ‘The Fool’ – synthesizers. And all those who believed, supported, inspired and contributed to the album realization.

The Knutz is one of the main Brazilian names in the dark scene of the country, well-known by the energetic live performances and a distinguished music. The group roots come from punk and goth rock, but they don’t simply keep limited on a small range of genres or ways of thinking. They can please rock ears from anywhere with unique BatCaveabilly rocking sounds, wild synths and attitude. ... more

Bandcamp Daily  your guide to the world of Bandcamp

Featured sounds by K.Spark and WIZDUMB, plus Basi joins the show to discuss his latest release.